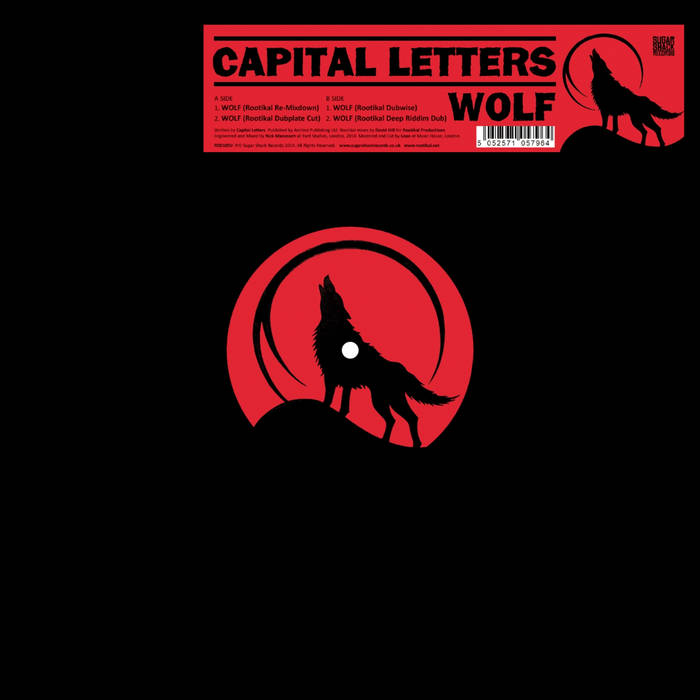 2014 has been a comeback year for legendary British reggae band Capital Letters. Reforming after three decades they have performed at well received gigs in England and France, released the 1980s recorded “Reality” album and a truly excellent 12” remix EP on our sister label Reggae Archive Records.
As well as performing live shows, the band have found time to return to the studio and record new material for a brand new upcoming album to be released in 2015. The team of David Hill on production and Nick Manasseh on engineering and mixing duties, who were responsible for the “Smoking My Ganja” Rootikal Remix EP, were keen to collaborate with the band again. Having chosen one of the new songs “Wolf”, they were given a free hand to mix their own versions.
The results of this second meeting between Rootikal Productions and Capital Letters, is a four track twelve inch featuring four different cuts of “Wolf”, a brand new track from Capital Letters but with the authentically vintage feel you can only get from a band that started out in the early 1970s. The sound has been skilfully enhanced by David Hill and Nick Manasseh, a team that appreciate the subtleties of the classic reggae mix.
Side A leads off with “Wolf (Rootikal Re-Mixdown)” the main vocal mix, with founding member JB on lead vocals warning us about false Rastas, false Christians and hypocrites in general. Both lyrically and production wise this could be a lost recording from the 1970s, proper old school roots reggae, “Wolf leave the sheeps and the shepherds alone”. The A side is completed with a second vocal mix in the shape of “Wolf (Rootikal Dubplate Mix)” a sparser mix where the vocals are given more room to breathe.
Side B provides the perfect compliment with some mellow dub vibes with “Wolf (Rootikal Dubwise)” a proper vintage style dub mix. David Hill and Nick Manasseh then strip the track back to its rhythmic essentials with “Wolf (Rootikal Deep Riddim Dub)”. Four excellent cuts, something to please all roots and dub fans and an ideal taster for next year's brand new album release.
Capital Letters “Wolf” on Sugar Shack Records is released as a limited edition 12” vinyl single and digital download on 24th November 2014 and will be available from all usual outlets.