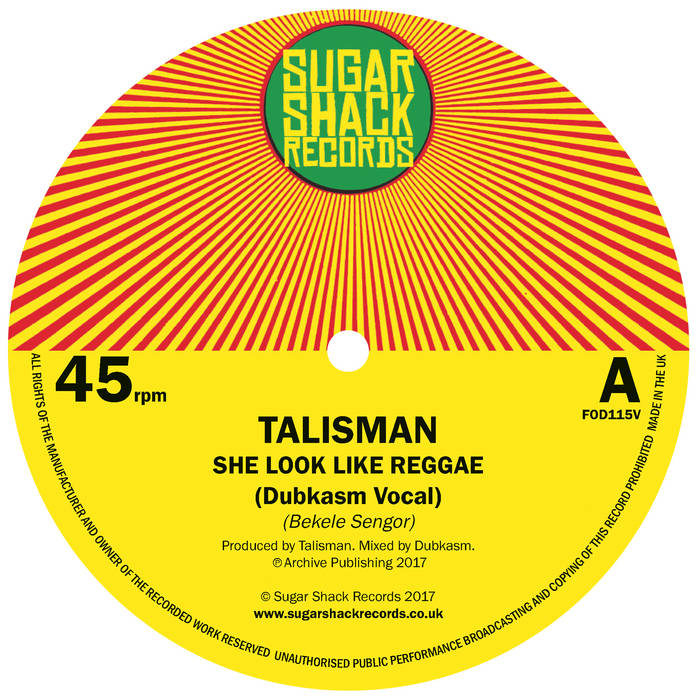 When it came to choosing the second release from their new album “Don't Play With Fyah”, Bristol Reggae legends Talisman decided to keep things local and let fellow Bristolians and legends in their own right, Dubkasm, have their pick of the album masters to imprint with their signature ‘sound system friendly’ style.
Dubkasm chose to rework “She Look Like Reggae”, taking the characteristic Talisman band sound and stripping it away, honing in on just the lyrics, they needed to change the song's vibe entirely and re-clothe it in new dance hall finery. The vocal is remoulded as a heavy roots cut propelled by a steppers drum riddim echoing those lyrics that have been chosen. After a slow build, the track moves along with the momentum of a juggernaut guaranteed to fill the dance floor; it drops into a dub workout finishing with a touch of distortion as though heard through a big stack.
The dub side does exactly what it says on the label updating the classic Talisman band sound to a more sparse and minimalist one that will sound great in a dance. This is a record that will appeal equally to fans of Talisman and Dubkasm as well as the wider reggae audience.
Naturally “She Look Like Reggae” Dubkasm vocal and dub could only be released on the soundman format of choice, the 7” vinyl single in a strictly limited edition and is released on Sugar Shack Records on 26TH May 2017 distributed by Shellshock/ SRD and available from all good retail outlets.

Written by Bekele Sengor
Produced by Talisman
Mixed by Dubkasml