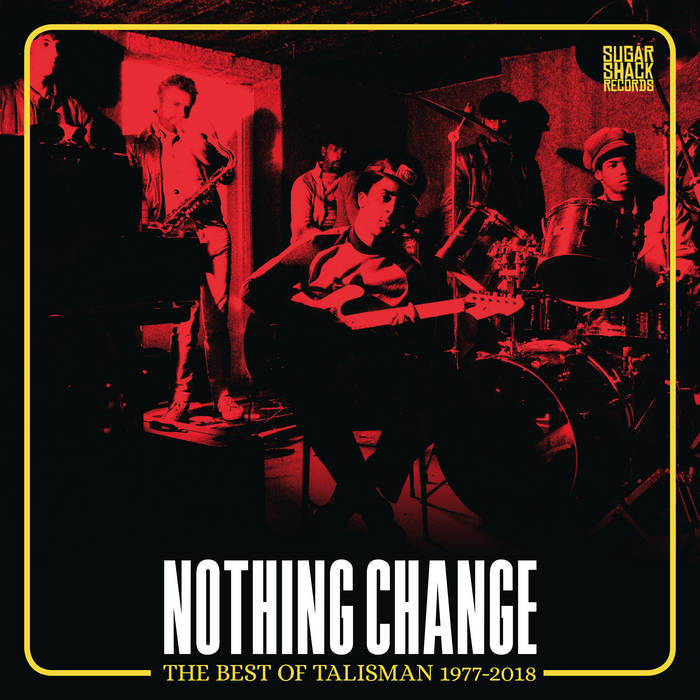 Very few bands can celebrate forty years since their creation and far fewer can still perform and record at an equal or even higher level than in their early years. Talisman have always been something of an exception to the rule. Although they took something of a sabbatical during the late nineties and noughties, at their core this is the same Talisman that formed as Revelation Rockers back in 1977. They may have been forced into a name change along the way, but they never ever changed the messages in their music or the sheer energy and enjoyment of their live shows; their talents are undiminished.

To celebrate the band's longevity and give fans old and new a career spanning perspective in a convenient package, we are releasing “Nothing Change” (The Best of Talisman 1977-2018) a 17-track compilation that includes the band's earliest recordings under the guise of Revelation Rockers to tracks from last year's acclaimed “Don't Play with Fyah”. Throughout changing times, technology and line ups the core of founding members Dehvan Othieno and Dennison Joseph give the music a remarkable continuity and demonstrate how some musicians improve with age.

Of the three Revelation Rockers tracks only “Jah Praises” has previously been given a proper CD release, both “Culture” and “Wicked Dem” make their debut appearance on CD. All three tracks show a band that hit the ground running with well written songs and their own sound. It's interesting to compare their first recording of “Wicked Dem” with the reworked version that would feature on their second single four years later.

Naturally all four sides of the band's first two singles from 1981 have been included in the form of the original 7” mixes, “Dole Age”, “Free Speech”, “Run Come Girl” and the aforementioned second version of “Wicked Dem”. Unfortunately, a lack of space precluded the longer 12” workouts which are well worth tracking down.

1984's debut album “Takin' The Strain” donates not only it's title track, but also “Lick and Run” and “Ah What You Seh”, all well-rehearsed favourites of the band's live appearances back then.

What might be termed a comeback album and their first recordings after reforming, 2013's “I-Surrection” provides four tracks with “Greetings and Salutations”, “Hey Yout'”, “Things Ah Get Tough” and “Help Yourself”. The album is completed with three tracks from last years extremely well received “Don't Play with Fyah” release, “Talkin' Revolution”, “She Looks Like Reggae” and “Relijan” which proved something of a hit last year garnering strong radio play across Europe. These three tracks demonstrate that even after forty years Talisman continue to innovate and improve with age.

“Nothing Change” (The Best of Talisman 1977-2018) is released by Sugar Shack Records on CD and digital platforms on 25th May 2018, distributed by Shellshock and available from good retailers worldwide, it provides the perfect introduction to one of the best reggae bands Britain has ever produced.

Tracks 3, 8 and 15 originally released on Embyro Records 1984 (Taken from the ‘Takin The Strain’ album)- Recorded at Right Track Studios, Bristol and engineered by Richard Lewis aka UK Scientist – Produced by UK Scientist and Talisman

Tracks 11, 14 and 17 originally recorded as Revelation Rockers in 1979 but not released until 2012 on Bristol Archive Records (Taken from the ‘Jah Praises’ album)

Copyright on all photos remains with the original photographer – we thank them for their great work
Including: Diane Potter, Anita Hummel, Lee Thompson, Kevin Wells, March Hayes

With over the many years: