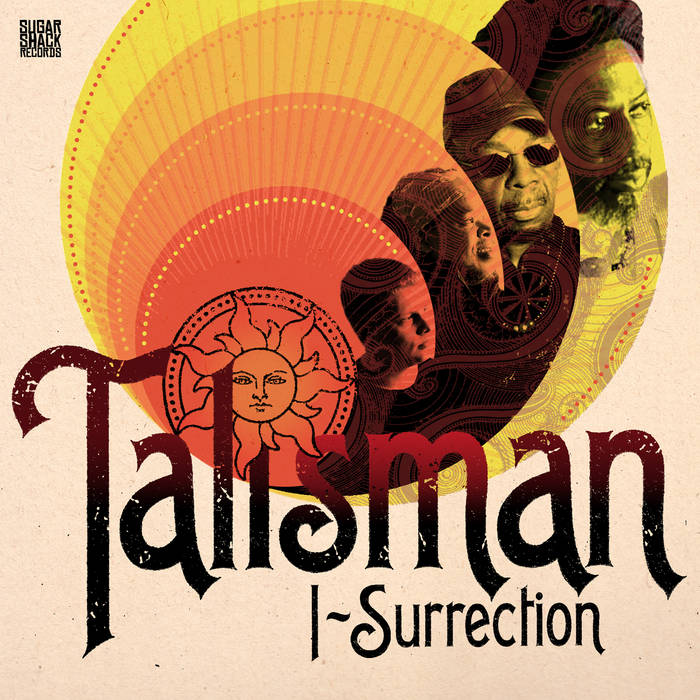 Thirty years after they recorded their debut long player, 1984's ‘Takin The Strain’, Bristol's roots reggae pioneers Talisman have found enough space in their busy live schedule to record their third studio album, ‘I-Surrection’, to be released via Sugar Shack Records on 30th September.
Having reformed in 2011, Talisman have spent the last two years honing their skills and playing live shows at every opportunity, including the support slot on The Selectors' recent UK tour. Original core members Dehvan and Dennison have also found the time to write the six new songs that, along with their instrumental and dub counterparts, form this latest twelve track set. It's hard to escape the economic and political similarities between today and the bands early eighties heyday, so it's no surprise that all of the songs deal with political or roots themes and resonate with the classic sound of British reggae from the golden age.
The way the music sounds is no modern pastiche; Dehvan and Dennison have been playing together for 35 years and the classic roots sound comes naturally. Likewise, the social conscience they display in their song writing has always been part of the Talisman sound. They are the real deal and this is a reggae album with genuine heritage.
When it comes to getting the right sound, the choice of producer is everything. For this release Talisman have collaborated with Rootikal Productions David Hill, a man who fully understands reggae's rich history as well as how to get the right sound from modern recordings. Collectively they have achieved one of the best roots reggae albums since its seventies heyday.
From the opening lines of “Greetings and Salutations”, it's clear that you are in for a treat as the timeless sound of roots reggae bursts forth from the speakers and envelops the listener. Conscious lyrics underpinned by great music, is a winning combination.
With its call to arms, “Stand up and help yourself, stop hoping for things to change, stand up and help yourself”, “Help Yourself” is a call to arms in the anthemic tradition. Talisman haven't given up the fight, they've just been regrouping and with this album they return to the struggle with a full frontal attack.
“Hey Yout” is dedicated to the next generation, those who need to take up the struggle, reminding them that previous generations have trodden the same path, but with patience and a positive attitude they can overcome “Babylon Pressure” and achieve a better future for their world.
“Season For Freeman” propelled along by the addition of some great playing from Matic Horns could almost be a lost gem from the seventies, if its catalogue of black martyrs didn't include the recent losses of Stephen Lawrence, Trayvon Martin and Smiley Culture. The point that whatever progress society has made some things haven't changed is subtle but well made.
The album takes an almost Nyahbinghi direction as we “Praise Jah”, an upbeat and joyous track that's almost hymn like and makes one want to sing along.
“Things a Get Tough” has an almost sixties feel, reinforced by the repetition of the lines “rougher than rough, tougher than tough” lyrics that strongly recall the classic tunes of the rude boy era. Even if they've cleverly given a nod to the past the lyrics themselves are just as relevant to today where it's more about the tough economic situation than which rude boy or singer is the toughest.
Every track comes with its corresponding dub version, skilfully mixed by David Hill for Rootikal Productions and dub in the best sense, where each version stands on its own musical merits as a fully thought out track rather than being a mere afterthought. The sole exception is ‘Hey Yout’ which rather than a full dub workout gets reimagined as a classic sounding melodica version.

This album takes the best aspects of reggae's musical heritage and fashions them into an album that deals with the realities of 2013. Roots reggae is back and the revival starts here! ‘I-Surrection’ is released on CD and Digital platforms on the 30th September 2013.

Greetings & Salutations, all praise and glory to the divine Creator, from whom all blessings flow, known by many names & many natures, Mwari, Jah, Buddha. The cycle of life is eternal and we give thanks & praise for the privilege to be included in this revolution. We acknowledge the pain and suffering of our Ancestors whose shoulders we stand on. Hey yout’ this is the season for freeman, it’s time to help yourself because things ah get tough. Cry if you wanna but we done with that, now is the time for I-surrection of the old wine. Money, money is not everything, love come first, so let’s umoja.
Praise Jah.

A very special ‘Thank You’ to Mike Darby and the team at Sugar Shack Records for engineering the return of Talisman to live music creation and performance also the team at Midnight Mango who fed the five thousand with five loaves and two fishes! Zac you truly are ‘the fixer’.