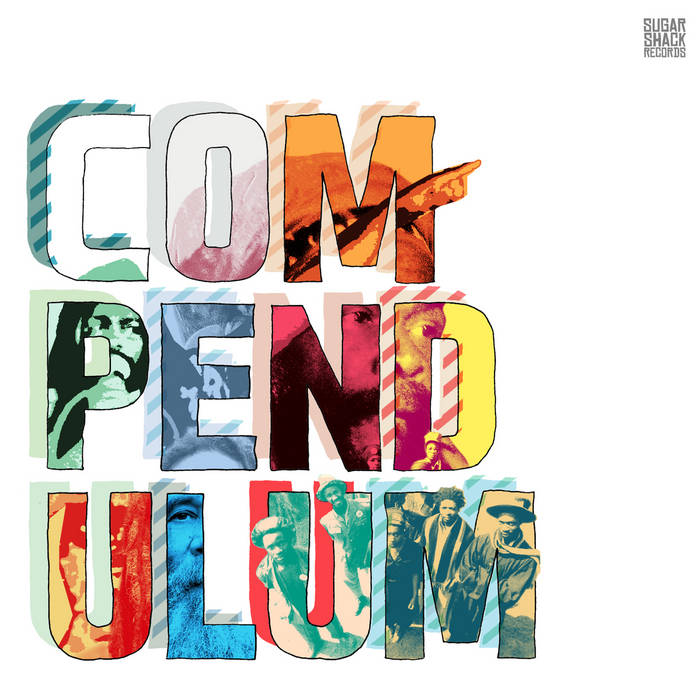 Reggae has been around for nearly fifty years and as such, it's rare to find an album that takes a truly new and unique approach to the music, but that is exactly what “Compendulum” does. This album isn't a compilation, it's not a remix project, it's not the vision of one producer or musician, it's not old and it's not new, yet it is also in part all of those things and most importantly totally fresh and enjoyable.

Chris Potter aka Compendulum joined the Bristol based Arts Opportunity Theatre Company in 1981 becoming the keyboard player for Zion Band, who provided mostly reggae based live musical backing for the Freedom City theatre production. They also released a 12” vinyl EP, with several tracks since reissued by Bristol Archive Records. When Freedom City ended in 1982, many of Chris' band mates moved on to form Restriction, but Chris was invited to join well established Bristol band Talisman with whom he went on to tour the U.K. and Europe supporting acts including the Rolling Stones, The Clash, Aswad and Misty In Roots. The many weeks spent in the studio recording the band's debut album “Takin the Strain”, inspired an interest in music production and although he left Talisman in 1985 to pursue a successful business career, his interest continued and he built himself a recording studio.

As someone who played in both Zion Band and Talisman, it was only natural that Bristol Archive Records head, Mike Darby would establish contact with Chris, which led to Mike giving Chris access to various masters to see what he could come up with. The results are now available for everyone to hear on “Compendulum”, a 16 track compilation of Chris' take on how some old and new, familiar and unfamiliar tracks should sound. Mike gave Chris free reign and thirty years outside of the music business has given him an entirely fresh approach to mixing. He doesn't try and make them sound vintage, he doesn't follow any fashion, he just follows his instincts and they are spot on.

Six of the tracks are from Birmingham's Black Symbol which are the earliest recordings on “Compendulum” and date from the early 1980s. Whilst we were compiling Black Symbol's album, we realised there were several unreleased recordings missing and whilst searching for these we came across additional unmixed tracks on a 2” tape which is the source for the four vocals and two corresponding dubs. The resulting mixes are quite straight but timeless, taking Black Symbol in a mellower and laid back direction, emphasising the beauty in their music although “Jah Children Come First” is given the urgency it deserves.

The other vintage recordings are those by Prince Green aka Drummie, not only did Chris have carte blanche he also had to add various missing parts to the incomplete and unmixed session tapes. Drummie grew up in Kingston Jamaica, surrounded by music, his elder brother being a member of the Slickers. Moving to England he eventually settled in Bristol where he lived for many years collaborating with the Moonflowers and Henry and Louis, as well as toasting with his unique voice at many a local reggae night. Something of Drummies’ MC voice can be heard on “Cross Country Driver” where his Prince Far I vocal style is fused with a break beat rhythm to create a hypnotic hybrid, whilst “Slave” is heavier and hints at the mental illness with which Drummie battled.

Septuagenarian Bristol reggae legend Bunny Marrett provides four tracks recorded in 2014/15, including an update of “Bristol Rock” which he penned in the late seventies and is best known for having been recorded by Black Roots. This version has a very different feel and develops into a sparse dub workout. Bunny spent many years performing as a Jazz vocalist and that influence is most evident in the jazzy track “Noise” whereas for its dub counterpart, Chris takes us beyond both reggae and jazz with his enticing sparse soundscape; we also get another dub bonus with his version of “Mystic Man”
Fellow local legend Jashwha Moses also started his career back in the seventies. Chris has chosen a vocal and dub reworking for “What a Situation” the first track from Jashwha's latest album, 2015's “The Rising”. The final tracks are also from the Sugar Shack back catalogue. We return to the Midlands with Wolverhampton's number one reggae export Capital Letters and “Jah Music” the opening track on their 2015 album “Wolverhampton”.

“Compendulum” is a unique album which sees Chris exploring the Bristol/Reggae Archive and Sugar Shack catalogues old and new, released and unreleased in a new approach to the various artists’ compilation and is released on CD and digital download by Sugar Shack Records on 10th June 2016 available from all good retailers worldwide.

Compendulum is a concept of musical collaboration and exploration by the Bristol based producer and composer, Chris Potter.

Source of Material:
Black Symbol: These tracks were found on a 2” reel in the backroom of Fatman’s house in Handsworth, Birmingham. They were recorded probably by Phil Savage at Outlaw studios in the mid 80’s and never before mixed or released.

Jashwha Moses: This track was engineered by the late, great Mikey Taylor – Hall and is the first track on the Jashwha album ‘The Rising’ released via Sugar Shack in 2015.

Capital Letters: This track was engineered by Noel Browne in Birmingham, with vocals recorded by Wooley at Mind Searching Studios. It is the first track on the Capital Letters 2015 album ‘Wolverhampton’ released via Sugar Shack. It was also released as a limited 7” having been remixed by Nick Manasseh and David Hill again in 2015.

Prince Green (Drummie): These tracks were found on a 1” reel in the back of Bristol sound mans house Froggy. They were recorded in the late 80’s but had never been mixed or subsequently released. Compendulum has completely rebuilt the songs from the original transfers.

Bunny Marrett: These tracks are from new 2014/15 recordings originally engineered by Bunny in his home studio. Compendulum has then completely rebuilt and reworked the tracks in the style he now presents them in.