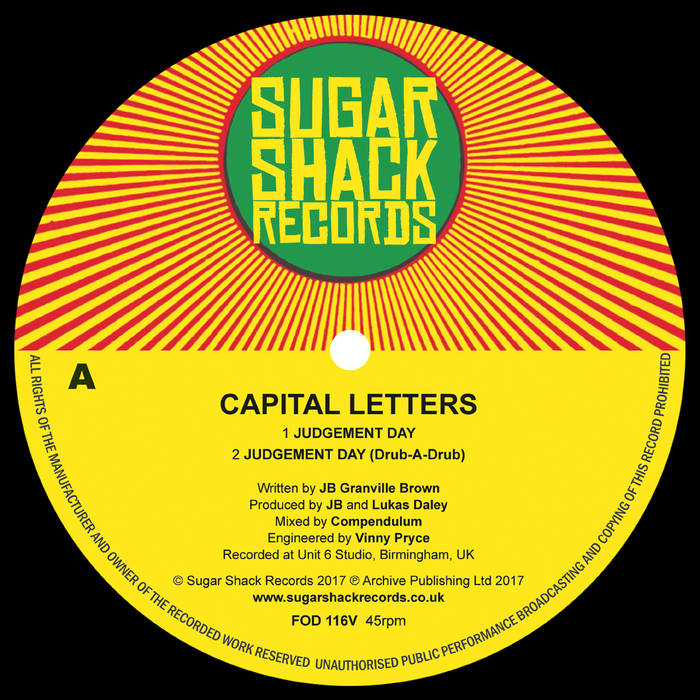 Capital Letters followed up their well received return to live touring by releasing brand new music with 2015's “Wolverhampton” and it's dub counterpart. Since then, they've continued to perform their authentic brand of British reggae to enthusiastic audiences across Europe as well as at home in the UK. Despite a busy touring schedule, the band found time to write and record new material. Fans will be glad to know that a brand new album is in the pipeline, but we thought we'd treat everyone to a tasty appetiser in the shape of brand new track “Judgement Day” released as a limited edition four track vinyl 12”.

Capital Letters were formed more than forty years ago and so it seemed appropriate to entrust the mixing of “Judgement Day” to someone with similar longevity in reggae, Bristol reggae stalwart Chris Potter, better known by his pseudonym Compendulum. This isn't the first meeting between Compendulum and Capital Letters, Chris previously remixed the band's “Jah Music” for his eponymous compilation album released in 2016.

Given such a strong track to work with, Chris has kept things simple serving up double helpings of vocal and dub aiming for the feel of exclusive dub plate mixes. The vocals carry the deep message of roots reggae at it's best, repent, repent, repent! JB's vocals fit perfectly the serious theme, “do some good today, good will follow you”, if you want redemption then live a good life; the biblical imagery and Rastafarian message is underpinned by deep, deep bass and propulsive percussion.

Both dub mixes reject modern gimmickry and are firmly planted in the classic old school dub mould, bass lines, percussion and stereo effects to the fore whilst making good use of the apocalyptic feel of the vocals. To this listener, “Drub A Drub Version 4” sounds like something of a homage to early eighties Sly and Robbie or at least something influenced by their dub workouts and for me that's no bad thing, the fact that Compendulum’s mix is reminiscent of the rhythm twins is no mean complement.

This is a twelve inch that works on multiple levels; it's a classic slice of Capital Letters to keep their fans happy until the full album drops. Its great roots reggae vocals, its classic dub mixing and more than enough weight to keep all sound men happy, a record that will appeal to everyone.

“Judgement Day” four track is released as a limited vinyl 12” and digital download on 1st September 2017, distributed by Shellshock Distribution available from all good retailers worldwide and on all good digital platforms.
www.sugarshackrecords.co.uk