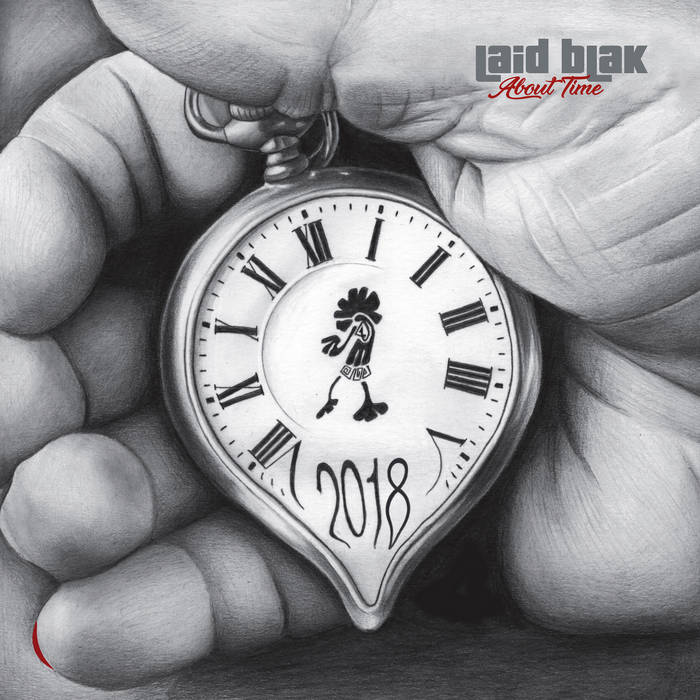 Bristol’s Laid Blak have trailed a unique path through the music jungle and picked up influential friends on the way. They don’t come much bigger these days than this key ally – Ed Sheeran. The red-haired one is a big fan, so much so that he used a section of the band’s earlier signature tune, ‘My Eyes Are Red’, in one of his own album chart busting songs and to close his shows.

It’s a useful thing to have in the creative locker, but Laid Blak’s new second full album, ‘About Time’, more than stands on its’ own merits. Core members, DJ Bunjy and MC Joe Peng, easily use every strand of elements that turn their ears and make a musical cocktail that is heady and delicious. There’s something for everyone, regardless of age or musical taste on ‘About Time’. It comfortably straddles styles that cover a range of bases in contemporary reggae music. And most of the time it’s anything but laid back!

Sure, the breezy album opener ‘Cool Dude’ is more low-key, the band taking the brave step of introducing themselves here with a track that is programmed riddims, rattling percussion, piano, keyboards and restrained, jazzy, minimal bass! It’s – well – cool, but filled with humour, whistling, street observed lyrics, scatter-fire vocals and am easy confidence that radiates. But after that the fare on offer heats up, seeing a glorious classic dancehall style tussle on ‘Mic Man’ with the fabulously UPFUL and agile vocals from Tita Lau adding a winning dimension. The guest female singers – Tita and the equally dextrous Tanya Lacey – add a soulful and playful dimension to other up-tempo blasters like ‘It’s A Pity’, ‘Hold On’, and ‘Serious’ which head out into anything from lovers rock to a sleng teng, old school step it, rub a dub, wrap it up, mash it groove with fat horns, melodica, wailing guitar, sound system busting bass and kicking rhythms.

There is some serious business attended to in ‘Changing’, which illustrates how priorities change in life, and how in ‘No Way Out’ and the darker, more militant Aswad era take in ‘I Feel It’, that life isn’t easy. But that period of reflection is a temporary break as it’s always the contrast of celebrating life in the cheeky, chatty Smiley Culture vibe of ‘Little Bit of This’, and the Mediterranean holiday romance possibilities in ‘Fatal Attraction’. Fresh, fun and fabulous while flowing with great tunes, this is an irresistible album of the band’s distinctive brand of street soul. It’s so powerful that the band felt the need to do a rush release of it! This is music that just can’t be contained or limited. Laid Blak don’t fail in their objective to bring ‘a fun filled sunshine dance music that keeps your feet moving and your face smiling.’ So, bang on cue, spring and summer is a’ coming, and about time too! Fire up the barbeque, slap on the jerk chicken to the flames, grab an ice cold Red Stripe and put on ‘About Time’! Let the party begin!

“About Time” is released by Sugar Shack Records on CD and digital platforms on 6th April 2018, distributed by Shellshock and available from good retailers worldwide.

All tracks published by Copyright Control 2018